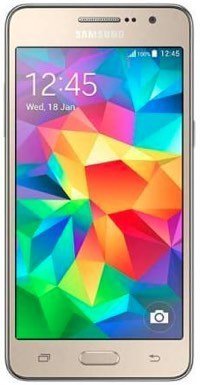 Samsung Galaxy Grand Prime's antutu score is 20,488
making it 2% better than all other phones in the world
The best performing phone in the world is Nubia Red Magic 6 Pro, according to Performance Ranking of AnTuTu V9.

This mobile smartphone weighs about 156 g. Samsung Galaxy Grand Prime has a form factor of 72.1 mm wide, 144.8 mm high, 8.6 mm thick. It runs on the Android platform, and is powered by Google Android 5.0 (Lollipop).

Samsung Galaxy Grand Prime’s processor and chipset is Marvell ARMADA PXA1908, 2014, 64 bit, quad-core, 28 nm, Vivante GC7000UL GPU with a CPU clock/frequency of 1200 MHz. It is powered by 1GB GB of RAM. The phone comes with 8GB internal storage capacity. Storage can be increased, with the help of these interfaces i.e. transflash, microsd, microsdhc, microsdxc. Samsung Galaxy Grand Prime’s display does not have a display notch. It offers a screen resolution of 540×960 pixels. With a display diagonal of 5″ inches or 127 mm. The device has a full horizontal bezel width of 9.84 mm and it has 16.8M display scales.

The device also features a mono microphone and mono loudspeakers, with an audio output of 3.5mm. The phone supports 2 sim cards. It has Dual Cellular Network Operation. It supports 3G and 4G.

Wireless communication interface on this device is supported by USB, Bluetooth, Wifi, and NFC.

The device is also equipped with a flash, which is a single LED. Some of the extra functions include macro mode.

Secondary or selfie camera on this phone is placed on the front, with a sensor type CMOS, 5.0 MP.

There could be price variations depending on discounts available online or stock clearance sale offers in major business centers and mobile shops all over Pakistan. We suggest to always look for PTA approved Samsung Galaxy Grand Prime in official warranty.

Here is a list of Samsung Galaxy Grand Prime prices in different countries around the world.

Here is a list of complete specifications of Samsung Galaxy Grand Prime mobile. We track over 104 specs and features for every mobile we list.